I’LL TAKE MANHATTAN—BUT HOW DID IT GET THAT NAME?

Written by Carlyle Property Management on 23.11.20 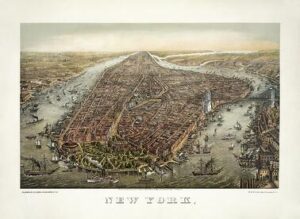 New York City was, for a very long time, simply Manhattan Island. The name Manhattan first appeared as Manna-hata in the log of Henry Hudson’s ship Half Moon. Hudson arrived from the Netherlands to explore the place in 1609.

So, then, what’s the meaning of Manna-hata? The word, from the language of the Lenape, has been translated as meaning a thicket containing wood to make bows.

As myth would have it, the Dutch “purchased” the island from the true native New Yorkers, the Lenape, in 1626. Not true, says the Smithsonian.

The Dutch built a wall in the mid-1600s to exclude the Lenape as well as the British. This was the origin of Wall Street.

Ultimately, the English took Manhattan. They wrested the land from the Dutch in 1674—at least for the century until independence.

What About the Bronx?

The Bronx is likely named for the Swede Jonas Bronck, thought to be the first European explorer to create a settlement in this spot in 1639.

Bronck acquired a lease from the Dutch West India Company, and reportedly purchased more from the original Lenape residents.

All told, Bronck amassed holdings surpassing 500 acres on the river, facing the village of Haarlem. Bronck’s River became the Bronx River. Who knew?

But in 1643, Jonas Bronck was killed in a Lenape raid—but Bronck’s name lives on.

From Manhattan to Today’s NYC Boroughs

Speaking of the Bronx, it used to be part of Westchester County. Between 1874 and 1896, it was brought into Manhattan (New York County).

Next, the counties of Kings, Queens and Richmond were annexed by New York City. By the time the nineteenth century ended, present-day NYC had fully taken shape.

Queens is thought to be named after Queen Catherine of Braganza. Catherine, from Portugal, married King Charles II of Kings County fame.

Before 1899, Queens County also encompassed what’s now Nassau County. The western segments of Queens decided by ballot to join Greater New York, but the eastern segments did not vote. The two populations split over the best location for the county courthouse.

The two groups agreed to disagree, with the eastern group forming a new County of Nassau in 1899.

Staten Island, up until 1975, was the Borough of Richmond. Richmond County held onto its original name—after Richmondshire in Yorkshire, England. The Dutch parliament was known as the Staten-Generaal, which explains Staten Island.

Kevin Walsh, curator of the award-winning website Forgotten NY, further tells us that Brooklyn got its named in 1663, after Breukelen, a city in the Netherlands. The name means marshy.

All told, the names of the NYC boroughs reflect a Native American past, and remind us of European rivalries and exploits that occurred centuries ago.

Indeed, the East Village was once Lenapehoking, an original Lenape homeland.

To learn more about the early inhabitants of New York City, visit the Lenape Center, a local organization dedicated to remembering the Lenape culture.

At Carlyle, we offer apartment living at several locations in New York City, including Midtown East, Murray Hill, and the Upper East Side. All come with many more stories to explore.