Written by Carlyle Property Management on 4.11.19

Time to give thanks in a big way — and that’s the way we do it in New York City. Here’s what’s happening this month.

The big event is the 93rd Annual Macy’s Thanksgiving Day Parade. Famous for appearances by Broadway stars and the cast of Sesame Street, it happens from 9 ‘til noon — on of course, Thursday, November 28. It runs from 77th Street at Central Park West to Herald Square, finishing at Macy’s.

Actually, you can have a great time the night before the Parade, watching the balloon inflation party! That’s Wednesday night at the American Museum of Natural History (77th & 81st Streets, Central Park West along Columbus Avenue). Become part of the happy hubbub that steadily rises from 3 to 8 p.m. and beyond.

Bright and early in the a.m., more than three million people will fill Manhattan to see the Parade itself. Loads of people stake out their viewing spots along the route by 6 a.m., equipped with coffee and hot chocolate. Note that (ahem) there are no restrooms.

The public lines up from 72th Street on, at the west side. The Parade passes through this stretch from 9 to 10:30 a.m. Just do it. Check it out live—and then, Manhattan folks, you can go to a warm room with a TV and see the all performances broadcast from Herald Square! Join the fifty million people across the country who’ll be simultaneously tuning in for the Emmy-winning parade.

Planning ahead for a higher vantage point? Check out the section on “Brunch and Parade Views” from the Shops at 10 Columbus Circle.

Read More: Save Money and Energy Heating Your NYC Apartment 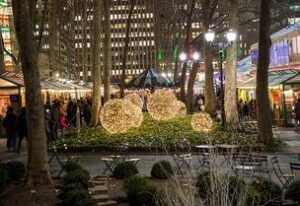 Have you experienced the Rink at Rockefeller Center? Get your skates on any time from 8 a.m. to midnight, when the City That Never Sleeps takes a break.

And while you’re out and about on Black Friday, visit Bank of America Bryant Park Winter Village, where more than 170 vendors will tout their wares. The Rink and the Village are already open. Enjoy! PS: The earlier in November you get to the rink, the more space you’ll get for gliding. 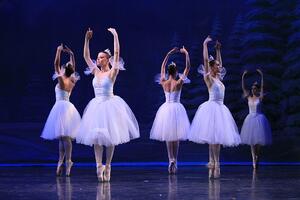 From November 29 through January 5, you can go see the New York City Ballet in George Balanchine’s production of Tchaikovsky’s most celebrated work: The Nutcracker®. Catch it at the Lincoln Center in the Upper West Side.

Astounding lighting and special effects add to the already amazing stage sets. This is hugely popular and one of a kind. Enjoy the breathtaking presence of the full New York City Ballet, joined by students from the School of American Ballet. There’s a blizzard on the stage and the dancing is fantastic — of course!

Carlyle Property Management in New York City is thankful for our community. We wish you the very best of the festive season. If you are hoping to join us, let us show you the available apartment homes waiting in Midtown East and the Upper East Side, as well as Murray Hill. Just give us a ring at 212.682.7300.